This is the first in a series of blog posts we will be publishing on postcard history as it relates to Clear Creek County.

In the United States, the printing and mailing of private postcards began in 1898 with the passing of the “Private Mailing Card Act.” This act jumpstarted a postcard craze that continued until the First World War. Clear Creek County, which was at the time becoming an increasingly important tourist center, was front and center in this new trend.

By the early twentieth century, tourists came in large numbers for the scenery and outdoor recreation opportunities the county could provide. Since virtually all came by train, it is not surprising that the earliest Clear Creek County postcards often highlight views or stops along the various railroads.

In 1901, an order shortened the clunky wording of private mailing cards to simply read “post card.” The period between 1901 and 1907 is retroactively known as the “undivided back” period, since only the address (no message) was allowed on the back. 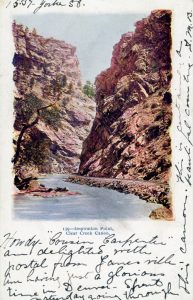 To remedy the inability to write a note on the back, people often filled any white space on the front with messages and short greetings. The postcard above of Clear Creek Canyon (actually in Jefferson County) highlights this phase well. Tourists coming to Clear Creek County by train would take the Colorado Central Railroad from Golden along Clear Creek Canyon, the same path that US Highway 6 follows today. There were many commemorative postcards one could buy and send during their trip, such as this one from “Inspiration Point” on Clear Creek. 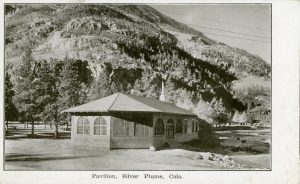 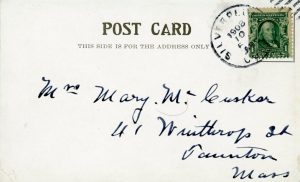 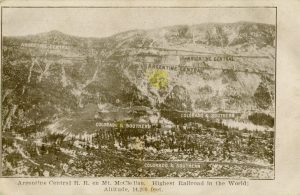 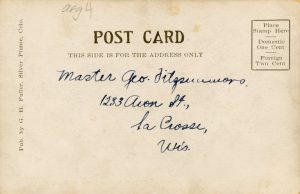 By 1905, tourists could take railroads from Golden, through Idaho Springs, over the Georgetown Loop, to Silver Plume, and all the way to the top of Mt. McClellan. Postcards served to commemorate such trips and served as souvenirs for tourists and their families and friends. Both postcards above were made and sold in Silver Plume. One can imagine a tourist purchasing these postcards when returning to town after a day trip to the top of Mt. McClellan. 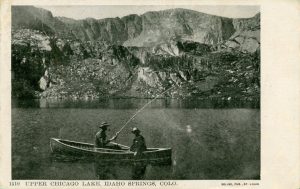 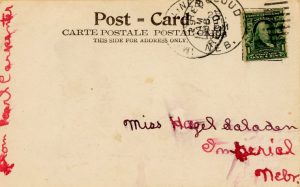 Train rides were not the only tourist attractions in the county, of course. The area around Mt. Evans was already a desirable place to camp and go fishing, as seen above in the postcard titled “Upper Chicago Lake.” 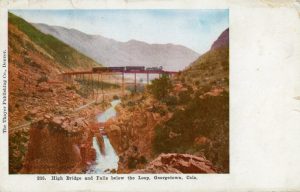 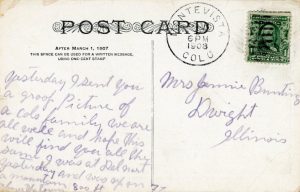 In 1907, new acts authorized handwritten messages on the back, creating the “divided back” of postcards we are familiar with today. Although fairly rare, a few postcards—such as this postcard of the Georgetown Loop—show this transition well, having been produced after the law was passed but before it went into effect.

Between this change in 1907 and the First World War, postcards reached a popularity that has never been matched. Our next entry will look at the plethora of Clear Creek County postcards dating from this “golden” era (1907-1915).

About Us
Learn about us and what we do.
Stay Informed
Check out our newsletter.
Support
Find out how to support the library.